Apart from being really well organized, the Dragon Boat Festival was full of color, sweat, energy, and joy. I liked how there were many different booths set up, representing many different aspects of Chinese culture. My teammates and I learned a lot about the origin of the Dragon Boat Festival, from the traditional “Zongzi” eaten on this day, to activities like dragon boat racing. There were also stunning dance performances, featuring performers wearing traditional Chinese clothing from different Chinese ethnic groups. 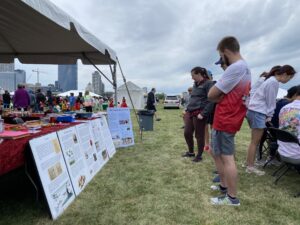 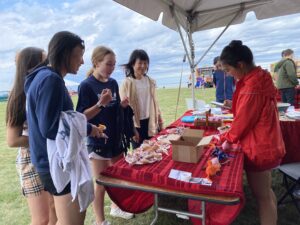 As for the race…dragon boat racing isn’t as easy as one might expect. To do well in a race, it takes a lot of mental and physical strength, as well as coordination. When my skating team first heard that we were going to compete in the dragon boat race, we were excited but also worried about capsizing; we didn’t expect much placement-wise since it was the first time many of us did dragon boating. Even our coach told us it was just to have fun. Eventually, we came to realize that it was fun, but also a lot more. 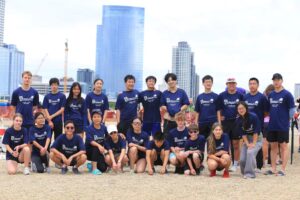 Since we’ve been training together as a team for so long, you’d think we’d have a lot of coordination. However, our first practice was quite a mess. Due to the lack of basic paddling skills, we didn’t really know how to synchronize our movements. It was a struggle to set and keep a good pace, our paddles kept hitting each other’s, and water was splashing everywhere. Our first race reflected this: it was a little better than our practice session, but we were still really uncoordinated; this resulted in a not-too-good placement or time. We were all tired, but it was a new type of struggle we had to learn to endure. Things started to lighten up when we had more experience and found the best order for us to sit. In the second race, we improved by 15 seconds! After everyone saw what we were capable of, we were determined to do even better. During our last race, I could feel everyone putting forth their best effort and how dedicated everyone was to improving even more.

Even though we were all exhausted from the preceding races, everyone was still persistent and our team spirit was still very strong; it was a truly touching sight. With this determination, there was no doubt that we would do well. Everyone was happy and really proud of each other when we crushed our record and finished first for our division. 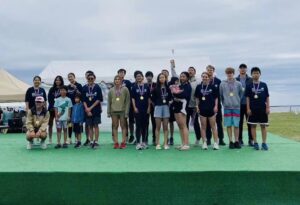 As a speed skater, this experience was used as a lesson that reflected my racing on the ice. It showed me the importance of not giving up even when I’m tired and the feeling of pride that follows after finishing a race. I am really grateful for the opportunity given to me to participate in the dragon boat festival this year!