I was a little skeptical when first asked to join the team Pinnacle for this year’s Dragon Boat Festival; I only knew two of my twenty-one future teammates. We had only one practice and little preparation time, and it seemed nobody on the team had done a dragon boat race before, so we were not sure what to expect going into the race.

The festival day came by soon after our practice. It was a windy and overcast summer day; forty teams signed up for the dragon boat race. When we arrived at the park, people had already set up their team tents and were warming up for the first race. We got into the boat and paddled towards the start. The air horn blew, and we took off, “One! Two! Three! Four! Five!” I thought we were going fast, but I saw the other boats racing ahead. Some of my teammates’ paddles got stuck in the water, and we were not paddling together, so we were unable to build our momentum. Our team came in last in our group. After the first race, our captain gathered the team to regroup. He said we needed to be in sync and not complain about the cold water splashing into the boat. He kept reminding us we needed to try our best, regardless of the outcome.

After some downtime, our second race began. We were in the Ruby Division with other teams who had similar times in the first round race. The air horn blew once again, and we took off. We had a better start this time; our drummer kept a steady beat, and everybody paddled in unison. We quickly passed two teams, leaving us neck in neck with the third boat for the rest of the race. Both dragon boats crossed the finish line almost at the same time; we couldn’t tell who won! 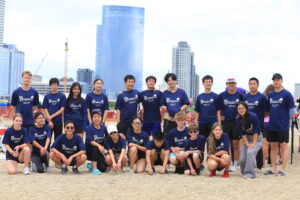 When we returned to the tent, my mom told me we had won by under one second. Our time from the second race improved, which made us feel confident about the final race. We advanced to the championship round of the Ruby Cup because we were within the top four finishing teams in the second round. We knew we could win the final race if we kept working together as a team and put in our best effort. 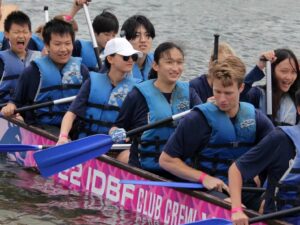 The air horn for the championship round blew, and we took off, gradually pulling ahead of the other three teams. We all followed the drummer’s beat, paddling hard and staying in sync. We kept the advantage until the finish line. This time we knew which team won and started to celebrate: team Pinnacle won the final race! Our time improved from 91 seconds in the first round to 75 seconds in the last race. We would have won the most improved award if there was one. During the award ceremony, we each received a gold medal, and our team was awarded the Ruby Cup Trophy. 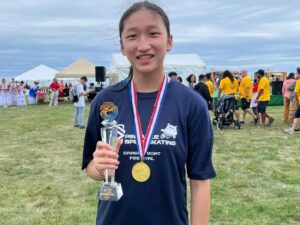 During my downtime, my friends and I walked around the park, ate Chinese food, and played traditional Chinese games like mahjong. I made new friends and had a great time racing with everyone. When I was leaving, one of my friends asked, “Will you come again next year?” And to that, I said, “Why not?”